How to Sell an Ebook the Old-fashioned Way

Today we have Helena Halme, sharing a very helpful idea she implemented for marketing her novel:

First I’d like to thank Karen for letting me be a guest on her wonderful blog to talk about my novel, The Englishman, a love story between a Nordic student and a British Naval officer. 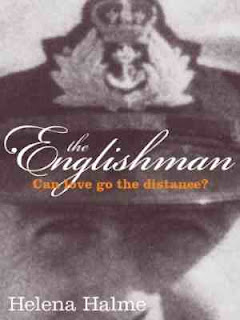 When I published my book for Kindle earlier this month, I thought: Who is this book really aimed at? The answer came to me immediately – commuters with e-readers. I knew my readership, but I urgently needed a way to make them aware of the book and encourage them to read it.

I live in a creative part of North London, and decided a leafleting campaign would be the ideal way to reach my core readership. So I asked my cover designer, Simon Wilder, to design a leaflet. Armed with a stack of them, I went out early one the morning to talk to commuters at bus stops and tube stations, handing out leaflets and telling people to read my novel.

Advertising would have been prohibitively expensive and, besides, it’s a rather detached, impersonal way to sell books. I was keen to adopt a more personal approach to get the word out. 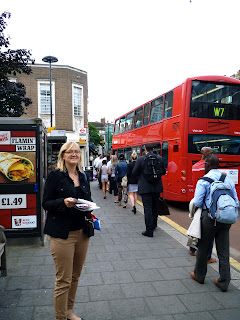 The leafleting was an incredibly positive experience. People were very friendly, especially when I told them I was the writer. I’d printed a short excerpt from the book at the back of the leaflet and my only slightly wobbly moment came when, standing by a particularly long queue at Crouch End Broadway bus stop at about 8 am, I saw 20 or so people, all reading my words. 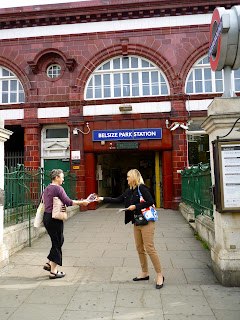 Occasionally someone would glance back at me. That made me feel a little exposed – as a first time novelist, it was quite scary to actually watch people read your work!

The Englishman is a ‘will they, won’t they’ love story between a Finnish student and British naval officer. It started off as a series of posts on my blog, Helena’s London Life, after my readers asked me how I came to be in England. The posts grew so popular, that I decided to turn them into a fully-fledged novel.

In 1980, Peter and Kaisa meet under the bright lights of the British Embassy and share kisses under the statue of the Finnish poet, Eino Leino. But they live hundreds of miles apart and at the height of the Cold War Peter chases Russian submarines while Kaisa is stuck in a country friendly with the Soviet Union. Will their love go the distance?

So why did I choose to publish digitally rather than take the more traditional print book publishing route? Well, I’ve had a few ‘close calls’ with literary agents and publishers in the past, but blogging has given me such a lot of confidence in my writing, that I decided I could do it myself. I’m also a bit of control freak and like the fact that there are no middle men between me and the readers. Besides, ebook publishing did well for E L James and her book Fifty Shades of Grey, so why not me?

However, being an independent publisher doesn’t mean you can cut corners. The Englishman has been professionally edited and proof-read, and the cover was designed by an experienced and talented graphic artist, Simon Wilder.

While still carrying on with the leafleting (I might go to the West End next!), I’m also working on a second novel, Pappa’s Girl, about a Finnish immigrant family in Stockholm, to be published on Kindle later this autumn.

Posted by Karen Jones Gowen at 1:30 AM