I should dedicate my current novel to Larry Brooks at Storyfix.com. This guy has been with me during those long midnight hours until early dawn, helping me with story architecture. (Well, not literally, heh heh, since I am happily married.)

Now as I round the bend on 52,000 words, I'm approaching the second plot point (spp). Why is this one so difficult? First plot point--easy. It's where everything changes for the MC. Mid-point milestone? No problem--that's where the curtain parts, new information is revealed and the stakes are raised. Got it. Done and done.

Now I'm at the second plot point, which Brooks defines as: the final injection of new information into the story, after which no new expository information may enter the story. It puts a final piece of narrative information into play that gives the hero or heroine everything he or she needs to become the final catalyst in the story's conclusion.

Got that? Me neither. Sigh. But that word final must mean something. Like, we're getting close to the end? (Disclaimer: this is a long post. You might want to start thinking of Tom Cruise right about now. So clear your mind, think of Tom Cruise, and keep reading.)

Okay, so take it a step at a time. After the spp, no new information can enter the story. Which means that AT the spp, there IS new information that enters, and it's the last bit that CAN enter, and it is information that gives the MC what he or she needs to BE the HERO (which is what I think final catalyst means.) It means no one will come in and save the hero, or he or she wouldn't BE a hero, now would he or she?

Another way Larry puts it: "it's when the chase scene begins." For example, the spp provides information to the MC of who or what or where the villain is-- therefore MC goes after villain (thus the chase scene) and maybe a fight scene, and then MC turns into a HERO. Voila!

Of course I'm way out of my league here, because I'm writing a character-driven novel with no chase scenes. That's okay too, according to Brooks, because the spp allows the hero to go from warrior to self-sacrificing martyr of all that is good: "At least in terms of the dramatic problem the story is portraying." So it doesn't have to be a chase scene, or the MC dangling from the top of the Empire State Building. It might just be the MC giving up something he or she really wants for the greater good.

I keep thinking of Tom Cruise in T 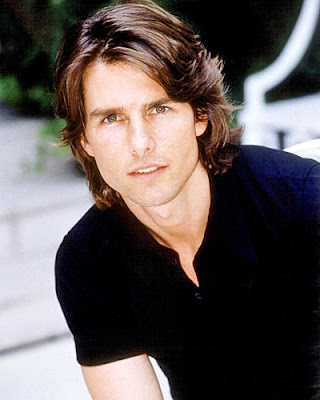 he Firm (movie). The spp must be when he finds out who's pulling the strings behind the firm and meets with the mafia-- oooh scary!-- but he's the hero now, he pulls it off brilliantly, and we can smell the ending right around the corner-- (another definition of spp according to Brooks). I love that scene in The Firm where Tom Cruise meets with the mafia. It's the last information that's provided, and Tom Cruise wraps it all up. He's a hero, he's a martyr, he's literally awesomely awesome how he pulls that off. I love Tom Cruise.

So as long as I can think of Tom Cruise, I think I can keep track of what the spp is and how it works to create the story architecture. Whew!

Here's the pop quiz. Name the spp in a movie you've seen recently, or a book you've read. Remember--the spp provides crucial information that allows the MC to become a real hero, and after that no new information can be revealed.

Let's see how well you can do! (If this is too difficult, you can just say how much you love Tom Cruise and how he became a hero in the last movie you saw him in, and you will probably have it right. Or Daniel Craig, if you're British.)