I was asked to do a guest post for the IWSG website about submitting to a small press. Many writers seeking publication with a traditional publisher may not realize how many options are available for them beyond the Big 5.

And as I say in my post, "After many rejections, writers can feel like publishing companies are the enemy and their editors the army blocking entrance to the castle. In fact, editors want to open the castle gate and usher in the right person. Publishers don’t exist without writers and manuscripts but it needs to be a good fit."

To see the full post go here.http://www.insecurewriterssupportgroup.com/2015/09/querying-small-press.html
Posted by Karen Jones Gowen at 6:31 AM 17 comments:

Calm down Everyone, it's only the End of the Ebook Boom

If you're an author watching your ebook sales and rankings, you've no doubt noticed the decline and may be wondering what happened. It all relates to the ebook boom and its subsequent collapse. In order for something to go down, first it had to be up. And ebook sales were up, up and up.

When Amazon came out with the Kindle, customers not only bought it like crazy but downloaded books in huge quantities to fill their new devices with reading material. This led to the ebook boom of 2009, and it lasted about 2 years before things changed. What happened?

In 2011 and 2012, ebooks were being published as fast as people could write them, everyone wanting to get in on the big money. In 2013, the ebook market had become highly competitive, with new titles still flooding Amazon while readers had become more discriminating.

As a result of these two converging elements, sales dropped considerably. Also, during this time, Netflix and Amazon Prime with their streaming of movies and TV shows were growing larger, their offerings expanding as more people began live streaming entertainment, a strong competitive force to books and reading.

In 2014 and 2015, publishers who rode the ebook wave from 2009- 2012 and invested unwisely began closing up shop. Many writers have become discouraged because they aren't seeing strong sales, when the promise was so sweet only a few years ago.

Being sensitive artistic types, we tend to take it personally, thinking it's our fault for not marketing enough or not writing well in the first place. Some blame the publisher for not promoting, or for a weak cover, wrong pricing or any number of mistakes they imagine were made.

Poor sales are not your fault, not the publisher's fault, not even Amazon's fault, although you'll see numerous complaints about what Amazon has done to hurt ebook sales.

Don't look for someone to blame. It's simply the nature of the book publishing business reflected in ebooks. In the time it takes to write and publish a few new books, this market went crash and burn. Both publishers and writers have felt the pain.

For a couple glorious years when ebooks were new, high sales fueled high investment, and people were making money. Those who in the past wouldn't have sold many books, like the self-published selling not very good books for .99, and small publishers who normally struggled to break even, were surprised and astounded to discover a gold mine with books on the Kindle.

But like all bubbles this one had to burst, and it has. About the only entity not feeling the pinch is dear old Amazon. Besides their highly profitable self-publishing services, Amazon is also a traditional publisher with a dozen imprints. No matter which way the coin falls, they're prepared to win big in the book industry.

In addition, they've consistently pushed for lower ebook prices. I can't fault this thinking. For a few dollars a month, people stream unlimited entertainment into their homes, creating very strong competition for books. This explains Amazon's Kindle Select program, which offers the consumer unlimited ebooks for a monthly fee, similar to Netflix for movies.

The current lull in ebook sales is due to very real reasons. A million new books a year! All while Kindle owners are jaded, swamped with promotional notices, and no longer downloading free or bargain books in huge numbers. Everyone has become much more discriminating with what they download to their devices.

The bubble has burst. I'm not happy about it but I accept it. What to do next?

Also, in such a competitive arena, now is no time to give up on marketing!

What kinds of promotions do you feel work best as an author or as a reader?
Posted by Karen Jones Gowen at 6:00 AM 15 comments:

Writing and Wellness and My Darkest Moment

Author Colleen Story maintains one of the most helpful, informative writer websites I've seen. It's called Writing and Wellness, dealing with every kind of trouble we writers may experience from depression to writer's block to chronic back pain, along with a lot of positive encouragement too.

On Colleen's blog I regularly find inspiration, motivation, helpful publishing information, marketing tips, as well as that warm fuzzy feeling you get when you find another writer going through the exact same thing as you.

Colleen asks each writer she interviews about their darkest moment, which of course being a glass half empty kind of person, is my favorite paragraph to read. It's always hopeful to read about what miserable thing someone else has experienced and overcome.

This week I'm honored to be the featured writer on Writing and Wellness. I explain how blogging helped me get through my darkest moment. The link to my interview is here.

Speaking of darkest moments, today is the 14th anniversary of 9-11, the bombing of the Twin Towers, which for most of us alive now was the darkest moment in our nation's history. I suppose for the previous generation it would have been the bombing of Pearl Harbor. I do remember the assassination of President Kennedy, as I was 15 years old when it happened.

And then the Viet Nam War I remember also as a dark time in our nation, where US citizens screamed obscenities and spit on our returning Viet Nam war veterans. These young men were just kids who'd been drafted. It sickens me to think of that particular time in our nation during the late 1960s when our country was bitterly divided over a war.

Although 9-11 was a tragic event one of the good things that came of it was unity, although temporary, within the various political factions in our nation.
Posted by Karen Jones Gowen at 3:30 AM 14 comments:

A lot has changed with blogging since I first began Coming Down the Mountain six years ago. I remember my first follower I didn't know from somewhere else-- Simon Kewin. I was totally amazed how this person found my blog from who knows where and decided to follow it. I still visit Simon's blog and have read several of his books. He's an amazing writer I discovered through blogging.

Many of my early friends are no longer active. It takes more work to get the same results as early on when blogging was new and exciting. Back then it was easy to get followers. You went out, followed people, commented on posts, they'd follow you back. This was a rush since it meant people were reading your posts and liked them enough to click the follow button.

When someone follows me I like when they also leave a comment, so I can identify them and follow back. Anyone who comments regularly on my blog, I add to the sidebar so I can quickly see when they've written a new post.

I feel bad if people follow me and I miss following them back. To me, it's common courtesy. Just like if someone comments on my posts and I neglect to return the favor. From childhood, my mother drilled the Golden Rule into me: "Do unto others as you would have others do unto you." That sums up my life (and blogging) philosophy.

I often wonder how well I'm keeping up with my idea of blogging etiquette. Do I follow everyone who follows me? Do I comment on bloggers who comment on my posts? I hope so.

If you follow or visit my blog and I never visit yours, please let me know in the comments, leaving your blog's URL, and I will remedy the oversight.

Is there anything about blogging you're anxious about? Or are you feeling carefree and on top of the world today? 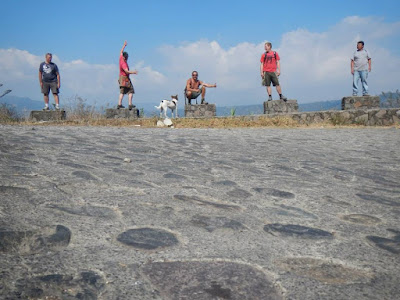 This is the IWSG post for September.  Go here to find more IWSG posts!
Posted by Karen Jones Gowen at 3:00 AM 28 comments: