Where in the World am I?

It's been less than two years since my last post in November, 2017, but to me it feels like forever. Time is like that when everything changes and your world goes topsy turvy. Two years ago, my husband and I were living in Salt Lake City and planning our next move/trip/lifestyle change.


On our list was Cambodia, India, the Philippines, definitely Vietnam. And maybe back to Mexico because we had loved living in Comitan, Chiapas. When we left Comitan, our landlord said the apartment would be ours if we ever came back. Considering we could live comfortably in this friendly mid-sized town in southern Mexico for just $800 a month for everything, we certainly discussed moving back.

But God had other plans for us. A year ago, my husband had emergency surgery for a dissected aorta. It ruptured on the operating table, before they were able to properly prep him for surgery. Miraculously, they did save his life and he did wake up from the surgery. Although he had a long road ahead of him if he were to fully recover from the trauma his body had gone through. 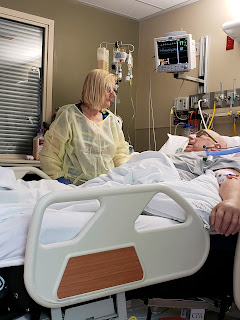 It was four months of ups and downs, much fasting and prayer for healing, many hospitals as they moved him around based on whether he was progressing or not. In July, it seemed like he might make it. Finally, he seemed to be improving. My hope was renewed.

Until an infection they'd kept at bay with powerful antibiotics flared up again. With a vengeance. Within days he was admitted to LDS Hospital, since the care center in Salt Lake didn't have the means to handle the situation. I saw him go downhill so fast it scared me. I felt this was the end. I cried buckets of tears that week.

He died surrounded by our family, surrounded by love. He had fought valiantly for four months after surgery to recover and stay with us. We were grateful for the courage he showed through this battle, but also grateful he was now released from his pain-racked, very ill body to return home to his Heavenly Father.

I've been blessed to feel his spirit with me often since that day, my eternal companion. We were married in 1970 in the Oakland, California temple of The Church of Jesus Christ of Latter-day Saints for time and eternity. Our church believes that families are forever, that the bonds of marriage and family are not for this life only but can continue on after death. The work done in our holy temples is simply that of uniting families for eternity. I've never been so grateful for that work as I have since Bruce died.
So where in the world am I? Currently staying with one of my sons and his family in Cedar City, Utah, while I get my bearings and decide what should be my next move.

I'll end this by sharing a picture of Bruce and me taken in 1970, our first Christmas as a newly married couple, heading out to travel to Illinois to spend the holidays with my family. We were so young! We had no idea what lay ahead of us, but as long as we had each other nothing else really mattered. And that is still true. 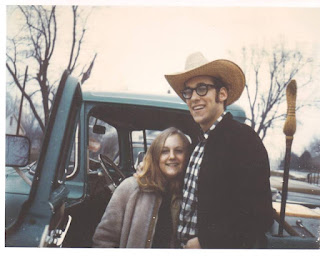