The Palenque Archeological Site and Why I Won't Go There Again

Bruce and I never made it to Guatemala's Tikal, the largest Maya ruins in Central America. We were determined not to miss Palenque in Mexico, considered to be a very large and important site in Chiapas, Mexico, and although not as large as Tikal, comparable to it. 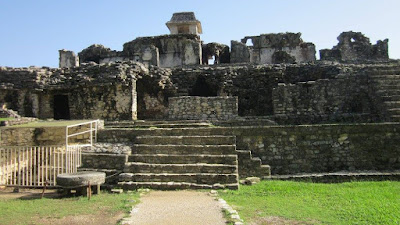 We had visited other Maya ruins in both Guatemala and Chiapas. All the sites we'd been to before had been peaceful, tranquil settings, where I wanted to just sit and bask in the feelings of these ancient cities. We supposed we'd have a similar experience upon visiting Palenque, although on a grander and more glorious scale, making us really excited about the trip. 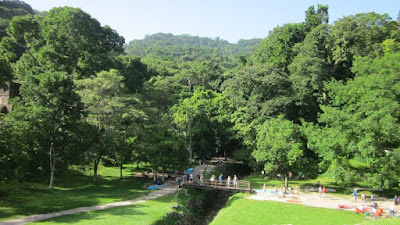 How surprised I was to find that Palenque was the opposite. No sooner did I step foot on the land than I had a compelling desire to leave. But we had traveled many miles to get here. My restless emotional state seemed silly. Nonetheless, I couldn't relax. I started walking and just kept going as fast as I could through the park, hardly stopping to look at the buildings. 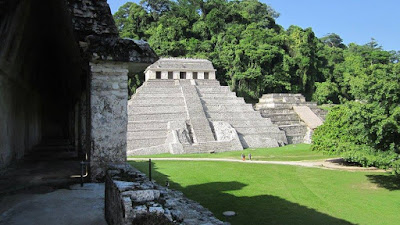 People were climbing steps and wandering through the palaces on top of the structures. All I could do was follow the pathways around and through the site, giving just a quick glance around. Bruce wanted to go slowly and take photos, while I wanted to walk far and fast as quickly as possible. We agreed to meet at a central location in an hour and a half, at 11 am.

He took all the photos while I felt the frantic urge to just get away. 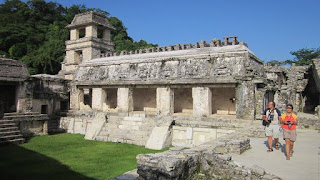 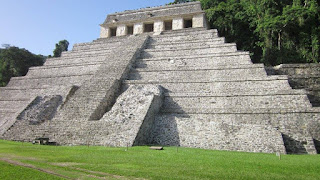 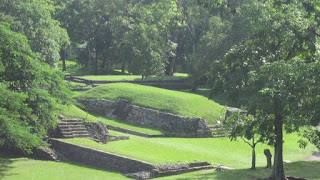 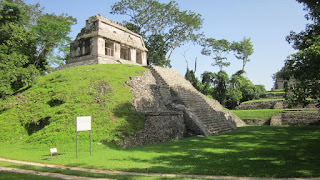 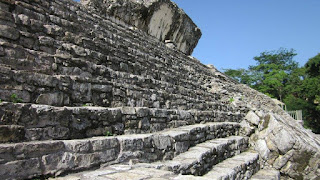 At last I saw him with his ever present backpack and cowboy hat making his way down the stairs of one of the structures. I walked across the grassy area towards him, thinking how nice it was that we'd found each other ahead of schedule. I visualized the two of us running across the field in a joyous reunion. 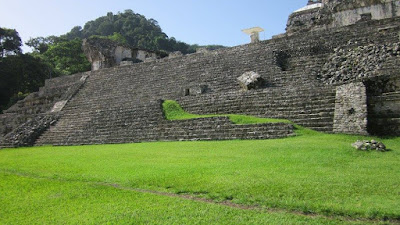 On the contrary, Bruce plopped down heavily on the bottom step of the edifice. I couldn't bring myself to go to the structures I'd been avoiding for the past hour and sat down on a stump in the field. We were within shouting distance of each other so we conversed in loud voices.

"Are you ready to go?" I hollered.

"Almost, just need to rest a bit. I'm really tired," he said back in barely a whisper.

He repeated himself loud enough for me to hear. A young couple walking hand in hand nearby must have thought we were crazy. Why were we shouting? Why not just sit together? What was wrong with us?

Always sensitive to what people were thinking about me, I forced myself to get up and go sit next to him. He told me how tired he was, how heavy his nearly empty backpack felt on his shoulders, how he had to rest a bit, then he'd be ready to leave.

Finally, we got out of there. Later, we reflected on our varied experiences. He had felt this strange, unbearable exhaustion and heaviness after exploring the structures, especially the tunnel pictured below. I'd felt an inexplicable need to get away. There were several other strange occurrences that I won't go into.
In the end, our conclusion was that bad things must have happened in this area those many centuries ago.

Anyone who wants to know more about Palenque can easily find information online. What I'm sharing is not ancient history but personal history, how the two of us felt very negative vibes coming from this place. A place I never want to visit ever again.

Has this sort of thing ever happened to you, where you felt terribly uncomfortable in an environment for no sensible reason?
Posted by Karen Jones Gowen at 11:50 PM 34 comments: