And April Around the Corner

Ever feel like life is on high speed? It's past the half-way point in March which means April is ahead and we all know what that means: A TO Z CHALLENGE.

Funny, when I signed up for the Challenge it felt like there was plenty of time. To plan out posts and write them in advance, take photos of my life here in beautiful Guatemala, get them on the laptop and lined up for those 30 alphabetized posts.

GAH! But every year is the same. The A to Z Challenge entices me and then I want to quit haha!

Which is why it's a challenge. If it were easy, it would have died out by now. People are attracted to challenge--we like to do hard, even impossible tasks. We're all sick that way.

See you back here in April!
Posted by Karen Jones Gowen at 8:38 AM 21 comments:

Facebook transformed the Internet, and I can't imagine social media without it. My recent experience with Facebook has made me a fan for life.

My sister Becki was dying, and there I was in Guatemala without a global smart phone.

However, our sister Jeri in Minnesota, who was with Becki through her stage 4 cancer diagnosis up until she took her last breath 10 days later, kept me informed through frequent messaging on Facebook. Even emails would have been too much trouble to keep up considering the pressure on Jeri-- but FB messaging was doable, fast and easy, a good substitute for texting. It kept us both connected until I could fly out to be there in person.

Not only that, but many, many friends were quickly able to get news of Becki and express their concerns, tell us of their prayers, share memories of our beautiful sister-- all because of Facebook.

Don't tell me a Facebook comment or like means little. It meant a great deal to Becki's 3 sisters and her two kids, as people from all over the world reached out to us through this medium and expressed their love and support.

After the funeral, my cousin Susie told me: "I've been scrolling down through Becki's Facebook page, just drinking in the photos and all her posts of the last year. It has become a treasured record."

I posted a video clip of Becki on my Facebook page the day of her diagnosis. Later, her daughter told me she had showed it to her mom in the hospital. She said, "It was the only time I saw Mom cry through all of this. She loved it so much." And best of all, Becki was able to leave a comment on that post which I cherish. 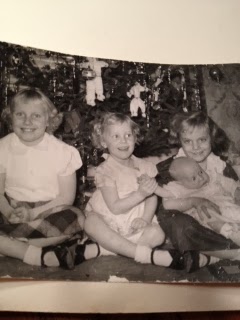 Like everything, Facebook has its positive and its negative. And like everything in life and on the Internet, it's up to each individual to decide if we'll use it for good or for ill.

Becki was the last of the 4 Jones girls to come into our family. We never thought she'd be the first to leave. Goodbye, our angel sister.

And thank you, Facebook, for your part in helping to lessen our grief.
Posted by Karen Jones Gowen at 8:15 AM 25 comments: