Today I'm one of three publishers featured on the Insecure Writers Support Group. We answer a few questions about the business of submitting and publishing one's book. I really appreciate being included in the post, as I never get tired of talking about this fascinating business, and about WiDo's mission to publish books that are:

Ten years ago WiDo was born, July 2007, with the publication of  Farm Girl. And as wonderful as the experience has been, a company that's in business for that long will upset a few people. This usually happens when someone feels disappointed in book sales, and they'll blame the publisher for not doing enough. I can understand the frustration. One's book is near and dear to the heart, like a child, and authors can get extremely protective about what happens or doesn't happen with their written offspring.

Recently, there was an unsettling situation with a new editor I'd signed on. She had emailed me, seemed personable, eager, and proficient. However, against my usual practice, I didn't ask for a resume or research her at all. I sent her a sample manuscript to edit and, liking her work, followed it with a contract, which she promptly signed and returned.

Then things got weird. Constant emails containing requests for more money. Questions about why she wasn't getting more money. Comparisons with how WiDo pays compared to the indie authors she had edited for. Asking for the work to be sent in a different format than what we'd agreed on.

It felt like I was being stalked! But I answered her emails as thoroughly as I could. Then came one saying unless we paid her more, she'd request the contract be cancelled. I said, Sorry, this is the agreed on price, and she replied saying this was her resignation and please cancel her contract.

I was happy to do so, since her unprofessional conduct had escalated since she turned in her contract. Mistakenly, I figured that would be the end of it. Two or three emails a day started coming in, asking for a second chance. She was wrong, she'd listened to indie authors who had influenced her, she wanted to try again.

I ignored the emails for about four days, until finally I decided okay, I'll answer and maybe that will end the stalking. I wrote and told her we will let things stand, sorry it didn't work out and good luck with your future career.

Her response stunned me: I was selfish, cold-hearted, cruel, and nothing good ever deserved to happen to me. Because everyone deserved a second chance and how could I be so mean. Oh, and by the way, she wrote, don't respond to this or write me again because I will delete your emails without reading them.

Anyone who deals with the public for any length of time will make a few enemies, upset a few people. But still, there's a stunned sensation that lingers long after the last vitriolic email comes into the inbox. Did that really just happen?

Have you ever had to deal with an unhinged individual in your personal or professional life? How did you handle it?

On Having Too Much Stuff and Getting Rid of It

There's a link going around Facebook to an online article titled: "Sorry, Nobody Wants Your Parents' Stuff."  Since I've been through it, both on the daughter/ daughter-in-law side as well as the mother/homeowner side, I could totally relate.

My mother and my mother-in-law were worlds apart regarding stuff and how to deal with it. Both were widows, and that's where the resemblance ended. My mother chose to downsize as much as she could, while my mother-in-law bought a larger house with more room for her possessions.

Being my mother's daughter and admiring simplicity, I am still fascinated with how my mother-in-law collected, stored, added on until it seemed she was buried under her stuff. Not that she was a junkaholic or hoarder. Her things were nice, often expensive, and usually well-organized. She had an entire room of her house for fabric, arranged like a retail fabric store. Another similar room for crafts and the supplies related to whatever crafts she'd done or planned to do. Another room for storage of food and household supplies. Two freezers held hundreds of pounds of cheese, butter, nuts and other deliciousness that would take two families a lifetime to consume.

On the contrary, my mother had as her goal to live in such a way that her daughters (the four of us) would not have to agonize over her possessions when she passed. The more she could get rid of, the happier she was. When she died, my sisters, nieces and nephews who lived nearby were able to completely empty Mom's two bedroom apartment in less than a week. My mom would have been pleased by that.

When my mother-in-law died, she had a 4000 sq foot house filled with furniture, family history documents and photos, and of course the many years worth of food storage. It took my sister-in-law a decade to completely go through everything and dispose of it one way or another.

I'm not saying one way is better than another. I think in a way my sister-in-law enjoyed her task, as she was able to spend this time going through all these things related to her mom's life and that of her family going back generations. And getting all the butter, cheese and nuts would have been nice.

But as for me, I'm more like my mom, taking pleasure in simplicity and knowing my kids won't be burdened with having to deal with piles of stuff when I'm gone. I've already done that job for them.

My husband and I currently live a very downsized existence. We got rid of nearly everything so we could leave the country three years ago. Now that we're back, neither of us want to start collecting again. Our goal is to stay free and unattached so we can pack up and go again when we feel like it. 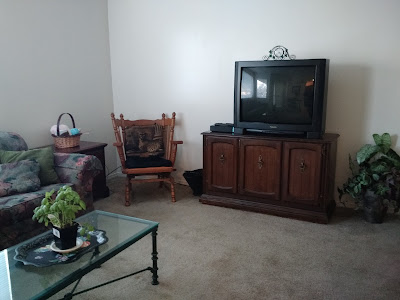 This is our living room, a spare space furnished at very low cost. The most expensive thing we bought was the couch for $25.

I have a couple of antique wall hangings I plan on getting framed for those two bare walls. I know once we leave, my daughter will be happy to take them for her home. She's already told me where she would hang them.

We did buy the TV cabinet. My husband needed a place to keep office supplies so we got it for $15 at Restore. It's one of those brown things that nobody really wants anymore. And if they did, they'd paint it. Since painting stresses me out, I'm okay leaving it as is, although I admit it's too dark for my taste.

I paid $3.00 for the basil plant on the table. It's going to get repotted and put on the patio. And basil isn't permanent, except in beautiful Guatemala where it grows up into a year round tree of abundance. In Utah, it dies with the frost.

This was a pretty long blog post to talk about living simply. Clearly I have more words than I have stuff, which is exactly the way I like it.
Posted by Karen Jones Gowen at 8:42 AM 17 comments:

And the blog is still here....

It's been six months since I posted. Isn't it nice how you can ignore the blog for such a long time yet when you come back, it's like you never left. Everything is in its place. Nobody moved a thing while I was gone. Nothing changed.

I woke up this morning thinking, Time to write a post! My last one was about our visit to Palenque, in Mexico.

Shortly after that trip, my husband and I realized it was time to return to the U.S. Our business, WiDo Publishing, has been expanding and needed closer attention. We needed to get in all our medical visits using our familiar doctors and insurance. And of course, to be closer to our family!

So we are back in Salt Lake City, Utah. We both found it strange that adjusting to the U.S. culture after being away for three years was more difficult and time-consuming than expected. I may go into more of that in later blog posts.

For now, I just wanted to come back to the blog and make sure it was still working!
Posted by Karen Jones Gowen at 8:08 AM 15 comments: