This is so fun to click on the Linky link for the A to Z Challenge and find new blogs to follow. Since I'm one of the hosts I feel obligated hehe, not that I have to force myself. Because I am a blogging addict. I love to find new blogs to follow, especially writers on their journeys, which I find very inspiring and motivating for my own writing journey.

If I haven't come to your blog yet, please leave a comment and I will! I have followed a couple who were just starting out. On one I was the first follower, that is just so cool. It reminds me of when I was starting out and it took forever to get ten followers. I wish I had something like this A to Z Challenge to really jump start my blog back then.

Thanks Arlee Bird for a brilliant idea! And thank you to all who have come on board. We are over 800 strong now, amazing!
Posted by Karen Jones Gowen at 12:11 PM 27 comments:

Email ThisBlogThis!Share to TwitterShare to FacebookShare to Pinterest
Labels: A to Z Challenge

Taking on the Challenge, do you have a theme?

I finally decided to go with a theme for the A to Z Challenge. Since my blog is about writing, editing and publishing issues, that's what I'll post about. They will be short literary definitions from A to Z. There is even a literary term that starts with Z.

And look at this, I'm already practicing up on keeping my posts short. I am also practicing up on toning down the exclamation points. It's killing me. This post had several but I took them out. Gah! Ok, I put one back in.
Posted by Karen Jones Gowen at 6:47 AM 46 comments:

Email ThisBlogThis!Share to TwitterShare to FacebookShare to Pinterest
Labels: A to Z Challenge, literary definitions

I've heard all the advice-- get your name on your blog, use your author name, people need to find you--so in preparing my blog for the A to Z Challenge I wondered if I should change my blog title to include my author name. Or at least put it on my profile LOL.

Whenever I have a serious question to ponder I always go to the big G, the fount of all wisdom and knowledge-- . And guess what I learned in like 5 seconds? That my name is everywhere anyway. By being on , , Goodreads, Amazon, commenting on blogs and all the rest of social media, don't worry, I'm out there baby.

Plugging in KarenG brings up tons of blogging references, each one with the link karenjonesgowen.blogspot.com. So by putting my author name behind the scenes, so to speak, it still pops up when it counts. No problem, I'm covered.

Now it might be a different story if I decided that I wanted to be Victoria Anderson Lilybucket, as my new author name for writing classic women's literary fiction. Or Vicki Ann Lily for writing chick lit, oops sorry-- I mean,  *commercial women's fiction*. Then I'd have to start all over. That makes me tired just thinking of it. So I think I'll stay with the really uninteresting name of Karen Jones Gowen. Which bores me to tears since I've lived with it in one form or another my entire life, which is why my blog title doesn't have it, and why my profile is KarenG.

But everywhere else-- like email, , Amazon, , Goodreads, Linkedin (which I've done absolutely nothing with yet), Shelfari (which I've done very little with)-- I am Karen Jones Gowen. I figure that's enough. Here on my blog or when I make comments on yours, I am reassured that there's no real need to have my full "author name" screaming at me. Whew, what a relief.

And am I the only one who's bored with their own name? What's up with that anyway?

On being an editor...

Jen Daiker asked me to do a guest post on her blog today about what it's like to be an editor for a small press. Since I've never been an editor for a large press, I just talked about being an editor period.

So come see me over at Unedited!

And guess who came home this week? This handsome guy is #8 Gowen son, the baby of the family. 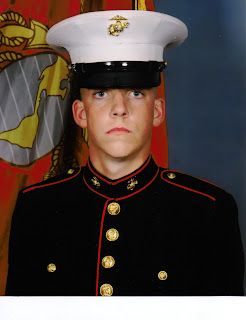 Only now he's a tough Marine. Ha, who is he fooling, he will always be my baby. 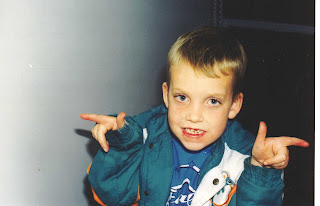 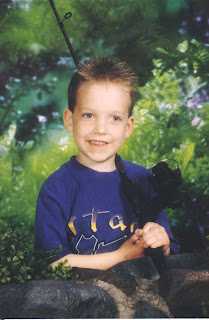 Be Sure to Google Yourself

This came out a year ago and I just discovered it online, because it's been awhile since I Googled myself. I really like how this piece came out. The reporter, Marianne Gillespie, was very nice and professional and easy to talk to, and I was happy with her article. I thought I'd share it on my blog.

I read the print version back when it came out, but didn't see it online until I Googled myself! 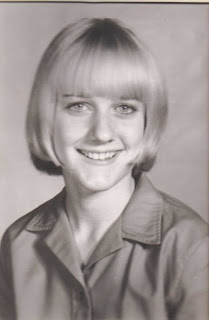 Her dad, Bill Jones, was the minister of First United Methodist Church for much of the 1960s. The Jones family, including mom, Lucille, older sister, Julie, and younger sisters, Jeri and Becky, moved to Chillicothe when Gowen was in eighth grade.

“I have great memories of the community, including the river,” said Gowen.

Once she graduated, she attended Northern Illinois University, the University of Illinois, and after converting to Mormonism at age 19, she transferred to Brigham Young University.

She met her husband while in Utah, and eventually they moved back to Illinois in Jacksonville. It is there that the stage is set for her novel, “Uncut Diamonds,” in which Chillicothe is specifically mentioned. She worked on the book for 10 years before it was published by WiDo Publishing.

With several titles for the book, Gowen said one day she looked down at her engagement ring. The diamond was lost for 20 years, but eventually was replaced after she and her husband kept saying they needed to replace it. They will celebrate their 40th anniversary this year.

Then it hit her. People are like diamonds,” said Gowen. “We’re so unpolished and so rough. As we live our lives, it polishes us.”

Loosely based on her life, the book follows the life of Shawn and Marcie McGill and their young family in the late 1970s. The couple opens a health-food store, which Marcie’s younger sister helps run. The story follows the family in their Mormon faith, financial issues during those years and the decisions the characters make.

She now is working on the sequel, “House of Diamonds,” and plans for a few more in the series.

Gowen said when she first starts writing, sometimes she has to make herself write for a certain length of time.
But once the rough draft is written, the revising and editing comes easily. Her work comes in handy, as she now is editing for WiDo Publishing.

When not writing, she spends time taking care of the house, gardening and reading. Her latest interesting read was “Nancy Drew Girl ,” which tells about the creation of the Nancy Drew character.

She is the mother of 10 kids, ranging in age from 38 to 18, and eight grandchildren, living in Utah, Colorado, Texas and California. “Someone once said, ‘We’re like our own country,’” Gowen said with a laugh.

With family at the forefront, it seems natural her first book would be about a family member. Gowen did not intend for “Farm Girl” to be a published book. She had written articles and had other stories published previously, however.

A few years ago, she was finishing her degree at Brigham Young and was in a folklore class. She chose her mom as her person to interview and write stories about her life. “At first I turned it in as assignments, but it was so fun,” said Gowen. Her mom, she said, had such a good recollection of her life.

The book follows her mom’s early years on a Nebraska farm, beginning in the 1920s, including remembrances of farming, country schools, the stock market crash in 1929 and more.

Gowen decided she would present it to her mom for her 90th birthday. While Gowen’s son was printing the collection of stories at Kinko’s, which also included photos from her grandmother, people commented that they wanted to buy it. In 2007, it became Gowen’s first published book.

Her dad is deceased, but her mom, now 92, lives in Aitkin, Minn.

Gowen’s books are available locally in Quincy and Nauvoo, and also by searching for her name on .

“I never kept in touch with people from high school,” Gowen said, but added that she still thinks fondly of her friends and their part in her life. She wants those in town to know this: “Never give up on your dreams.

“It was always my dream to be an author, to write books, and finally at 59, “Farm Girl” was published, and “Uncut Diamonds” came out shortly after I turned 61. “House of Diamonds” is scheduled for publication next year  — I’ll be 63 — and I intend to keep on writing. So it’s never too late to realize a dream!”
Copyright 2010 Chillicothe Times-Bulletin. Some rights reserved