What Part Does Luck Play in Success? 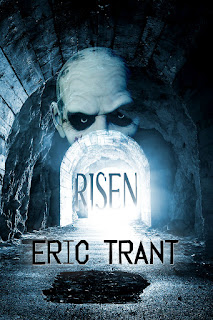 Today I'm hosting Eric Trant as part of his WOW blog tour for his new novel, Risen. First, a little bit about this intriguing book, and then a really thoughtful and inspiring post as Eric guest blogs today on Coming Down the Mountain.

Haunted by visions of a demonic angel and sold into servitude by his father, young Alberto battles to survive the horrors of a nineteenth century Sicilian sulfur mine.

Suffering merciless brutality, Alberto must save not only himself but his deformed older brother, both pawns in their father’s mad plan to overthrow a group of wealthy landowners.

Bound by a death-debt to his hunchback master, Alberto discovers a door the miners call Porta dell’Inferno, the Door to Hell, deep within the sulfur mines. When he learns the demon-angel of his dreams stalks the caverns beyond the door, Alberto realizes a strange fate has lured him and his brother to the gates leading to the underworld.

Now Alberto must face the creature from his visions and rise to become the man his father demands him to be, or remain forever trapped in a hellish world where none escape.

Risen is available in print on Amazon.

What Part Does Luck Play in Success?

When it comes to success in any discipline, we discuss things such education, talent and experience, but something we only mention tangentially is the element of ~luck~.

Opportunity knocks softly. Fifteen minutes of fame. Every dog has its day.

And so on. We sense luck in our success and in our opportunities, but we do not openly discuss and prepare for it.

For instance, let's say you meet a well-known author-agent in a coffee shop. It is a chance meeting, and by equal chance they are open to discussing your books (they will usually trip you and run), and by monumental chance they represent books in your genre, and by God's grace they are seeking a new author for an open slot in their release schedule next year.

Would you be ready for that stroke of luck? Are you prepared for lightning to strike?

Do not break the big break

See, success requires a great deal of luck. Every successful story begins first with vision, then with hard work crafting that vision into reality, and concludes with a ~big break~ that changes everything. Whether it is building a company or publishing a book, I challenge you to find a success story that does not follow this well-grooved arc.

So, you chat with the agent. Her name is Rebecca. She is insanely pretty and kind of intimidating because she smells like the mall, is sharply dressed and well-kempt, and totes a purse that is probably more expensive than your Hyundai, and large enough to bag it.

Not really. She is an author-agent. She is wearing a workout shirt and yoga pants, no makeup, hair in a ponytail, and she has two black labs tied up outside named Joker and Puddin. She is short and a little pudgy, insanely pretty because of her eyes (avid readers have amazing eyes), and her name really is Rebecca. Call her Becki, with an 'i'. She is drinking a seventeen-syllable iced-something, and she wants to go outside to sit, so she can water the pups.

It is summer and muggy, but you follow her outside. You sit. This is your big break.

You spill your coffee on her dogs.

But you were prepared for Becki, with an 'i'. She laughs and says it is no big deal, they love to get wet, and you thank God Almighty you ordered iced mocha instead of your usual scalding-hot Americana, another stroke of luck. A barista appears with a towel, helps you with the dogs, takes the empty cup and says she will bring you another drink, what was it you ordered?

Neither of you brought your computer, and you do not carry your books around, so what do you say to her?

Well, you tell her about your books. You ~do~ have more than one book, don't you? Of course you do. You wrote several, along with some short stories, and penned at least a dozen total, not all of them published. You forget how many short stories. A bunch.

Do you have a blog? Absolutely. What about a fan page on Facebook? Not really, but you belong to some online groups, and collected a fair number of followers.

What are your sales like? Ouch. Still, you confess your sins, and she purses her bottom lip, but then says, I might be able to fix that. Tell me what you are working on next.

You pull out your elevator pitch, the one you began practicing the instant you selected a working title for your WiP.

It is tentatively called WISH. It's about a family implosion following the loss of a toddler, and focuses on the five-year-old daughter, who meets a silly little man sitting on a spring-fed well, and makes a wish she wishes she hadn't.

(That is my next piece, actually. This is what I would say to Becki.)

You tell her more about WISH, describe your current release, RISEN, from WiDo Publishing, how you amped up your marketing and have now built a bit of a backlog you can leverage for plus-one sales.

Your respawned iced mocha shows up. There is a pause as the barista asks if you need anything else.

Afterward, you sip and chat, and turn the discussion away from writing and toward personal things. She has a husband who is an engineer like yourself. He is tall, though, and played basketball in college. She had to throw that in, you suppose, because you are not tall, and let's admit it, most engineers are short folks who are good at math and bad at sports. He really is an exception.

At some point, numbers and emails are exchanged, and she makes a full-request read for your upcoming WISH novel, when you finish.

Give me a month, you say.

No rush, she says. I won't be able to look at it for another fifteen weeks. I'll queue it up, though, so mark the date and don't forget me.

Otherwise, without all your preparation, a wet dog might be all luck remembers of you.
She says that last part over her shoulder as she leashes her pups, and how could you possibly forget her? This moment is scalded into your memory bank.

You rappel from your cloud as she walks away with her dogs, stunned that luck slapped you during your afternoon commute, thankful you stopped here and not the pub (honoring your wife's firm request), and amazed that something like this actually happened to someone like you.

Above all, though, you are thankful you were prepared when luck tapped your shoulder.

Eric resides in Dallas, TX with his wife and children, where he writes and manages his own business. His writing combines literary characterization with supernatural elements, all the while engaging the reader's senses with constant movement and vivid settings. His books are designed to be one-sitters, meaning they can and should be read in one (or a few) sittings, owing to the fast-paced nature of the writing.

You can visit Eric at http://www.EricTrant.com, or see his blog at DiggingWithTheWorms.blogspot.com.
Posted by Karen Jones Gowen at 5:00 AM 10 comments: