Upon reading "No Going Back" by Jonathan Langford 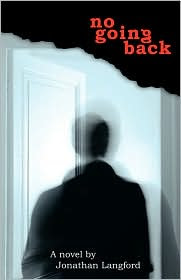 I am not comfortable with the topic of homosexuality, especially as it is presented in our culture today by gay rights groups. Therefore, No Going Back is meant for a reader such as I. It presents the Church's stand in an open way without preachiness or prejudice. It also presents the general stance of everyone else, also without preachiness or prejudice. And it presents a 15- year-old-boy named Paul, a good Mormon boy like any of our kids or our neighbors' kids, who realizes he is gay. The book opens with him sharing the information with his best friend, Chad.

The rest of the novel involves the people around Paul and Chad--their families, Chad's friends, the Gay-Straight Alliance group at school, the bishop. There are many characters and several points of view, which Langford skillfully weaves in and out around this one central issue of Paul's same-gender attraction. The character development is incredible. Read it if only to see the artistry with which Langford creates his cast of players. Even minor characters come to life on the page.

I found No Going Back to be a deeply spiritual, faith-affirming story that is neither contentious nor agenda-driven. In fact, it's a refreshingly honest look at all sides of this issue. Paul's dilemma and his subsequent pondering of what this means for his life now and in the future touched my heart and soul. Think of it. What happens when a young Mormon teen, one who has planned his entire life to serve a mission, to marry and have children, to be an active, committed member of the Church, comes of age and discovers that he likes boys the way he should like girls? Paul must decide what to do, and the first person he turns to for counsel is his bishop. Still, the final decision must be Paul's. Will he follow the advice of his well-meaning friends at GSA, or will he stay true to his covenants and follow his bishop's wise counsel?

This isn't a topic I have discussed much with my sons in their growing up years. Why would I? I'm a Mormon mom, and I didn't suppose it would ever be an issue. My seventeen-year-old son came into the room while I was reading, and we had a bit of a strange dialogue.

I said, "Maybe you should read this book. It's about a Mormon young man who realizes he's gay. Maybe you know boys like this." (I just wanted to see what he would say.)

His response shocked me. He said, "I wouldn't want to read it, because then I might start thinking I was gay."

I said, "You're not gay!" (I know this because he really, really likes girls.)

Our kids today hear about this topic probably a lot more than we do. Some of them may be afraid they are gay. Especially considering that sexual confusion is typical during the adolescent years, with same-sex crushes being a common occurrence. Reading this novel can educate parents and teens in a positive way, through the gospel viewpoint of same-gender attraction and morality, rather than through the common viewpoint of "Do whatever makes you feel good."

No Going Back is a fast read, even quite funny in places. I could hardly put it down. It is richly layered and complex, thought-provoking and heart-wrenching, a finely written tale of depth and meaning. I highly recommend it, and I look forward to more realistic fiction from Jonathan Langford.

Purchase your copy of this excellent novel from Amazon, the BYU Bookstore, or from the publisher's website www.zarahemlabooks.com.
Posted by Karen Jones Gowen at 2:00 PM