End of That Misery, Moving On

I can’t tell you how excited I am that today, launch day, ends the journey with my latest book, the self-help memoir Slim Within: 4 Rules of Eating 4 Permanent Weight Loss. There will be a blog tour coming later, and the usual marketing efforts here and there, but the creative part is done.

There are some books I've written that are difficult to let go of. This wasn’t one of them. Writing it and revisiting my past issues with weight and food and dieting was extremely painful.

These problems had been solved--all in the distant past--things I barely give a thought to anymore. Yet in order to write about them, I had to dig it all up. I was surprised by my emotional reaction to this process.

Still, I’m very proud of Slim Within, that I stuck it out and wrote the book. I'd like it to be a success but even if it isn’t one bit, writing it was something I really wanted and needed to do. I’m glad I wrote it and glad I’m done! 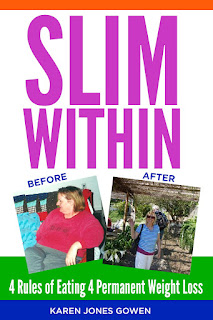 Two things happened to me today that were completely unexpected. Well, three if you count my husband washing all the dishes while I was out. And it's not even my birthday!

Then there was a letter WiDo's submission editor sent to me, concerning her rewrite and resubmit request to a prospective author. Although he seemed very eager to publish with WiDo, his manuscript had a few major flaws that needed correcting. We've learned it's better to ask for these corrections up front before offering a contract.

Most writers are wonderful to work with in editing but some will get stubborn when it comes to changing their masterpiece.

This particular writer's email disagreed with everything suggested and clearly stated he was not interested in a rewrite and resubmit. This is his right and choice, of course, but it's always unexpected when it happens. Usually a writer will take editorial advice and work to improve the manuscript to get another chance at a contract. Most writers are happy to get suggestions from an editor outlining the strengths and weaknesses of their submission.

His negative response was unexpected. It wasn't just negative, but highly emotional, including chastising our editor for getting the spelling wrong on one of his characters' names. A real prima donna, that one was.

The other unexpected occurrence was while I'm sitting in my "study", which is a bed in front of a second-story window. A man walks right past the window. Well, hello there!

Turns out we have these very narrow balconies outside the windows and the landlord likes to send men up there now and then to clean or paint. Unexpected!

We can never really expect the unexpected, can we? Because if we do then it's no longer unexpected. Has anything unexpected happened to you lately?