Learn to Market from the Indies 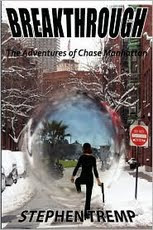 One of the self-published authors I follow and watch is Stephen Tremp. (And don't you like the word "indie" so much better than "self-published"?) Still, when I first started following his blog, before the "indie" phrase started taking hold, Steve proudly proclaimed himself a self-published author. His book, Breakthrough, was printed by iUniverse, but the marketing and  promotion lay squarely with him.

And now with changes in the market, even traditional publishers are putting more and more of the marketing and promotion on the author's shoulders. If you're with a small press, you can count on it--you're the one. If you want to see some real marketing expertise, watch writers like Stephen Tremp.

Here's some things I've learned about Stephen from following his blog the past six months.

He's a truly nice guy. Never mind that sci fi is not my genre, either to write or to read. I will buy his book because he's a nice guy, and I want to give him a chance. I have a daughter and several sons who love sci fi, so that makes it an ideal choice for Christmas. And the cover is awesome.

His blog, while designed to promote Breakthrough, is not just about him and his book. He posts about a variety of subjects, visits and follows other blogs, comments regularly. He's part of the community, not just posting about himself and his writing.

He does all kinds of things to market and works tirelessly on promotion. I have learned from him. I borrowed his sidebar buttons for ordering my novel as an ebook after noticing them on his sidebar. This is the second release of Breakthrough, newly edited, and now available as an ebook. Buy it here on Kindle.

He goes where the readers and book buyers are. He's done signings in bookstores, talks and presentations, and now he is doing more online while getting Breakthrough out there as an ebook. He has links on his sidebar for all the e publishing formats, and also shopping carts for purchasing print versions. Really, go visit his blog and just see everything he does, then copy it. You can't go wrong.

A scientific breakthrough in Einstein-Rosen Bridges, or wormholes, is stolen by a group of misguided M.I.T. graduate students. They scheme to usher in a global science-based oligarchy. Greed, betrayal, murder, mayhem, spiritual contemplation, and unconditional love define the power-play struggle in this fast-paced suspense thriller. As the death toll mounts, will Chase Manhattan and a multi-faceted cast of characters escape their hit list and destroy the discovery which threatens life as we know it? On sale in bookstores late August, 2010.

Posted by Karen Jones Gowen at 8:26 AM